Is there any motivation to keep farming ? 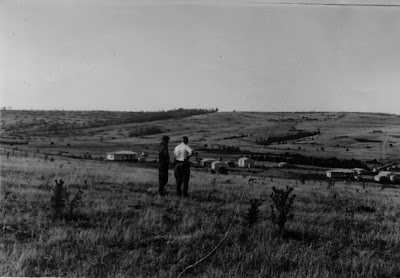 There is very little motivation to farm in Australia in 2013.  If we can't support our own to avoid high risk and low returns,  how in the world can we pretend to offer soemthing to the really poor in the world They try to farm too .  To understand why we , of all people should be so ineffective in supporting a key industry, we need to look at how we now see industry in general and industry policy in particular.

The picture is taken in Australias most productive and sustainable dairying country in the Western District but only just after the low  bush was cleasred and the soil nutition altered with micro nutrients . ( Many  said at the time - it should never be cleared )
The attitude of all the major parties to industry policy in 2013 is all one way and all the way with " let's exploit eh"
I always remember a miner , come farmer near Ballarat telling me we Aussies are more gamblers and speculators  miners than we are real custodians, yeoman and landcarers.
His point was valid . In our communities there are always people who don't care for their environment . However being helpful means being properly targeted and there is nothing properly targeted by pushing the earth and the people living on it . Unless our culture calls us back to care ) and not just in some token political way ) , our focus ( both city and country) will result in the  highest  productivity and the greatest risk for agricultural producers.
The aradox is that soem parts of the world have taught their people to accept marginally lower productivity and mush less risk. Admittedely in Europe, Agriculture is less subject to the risks of semi arid climates. Farmers have holidays in europe now insated of food wars . Are they dumb or are we dumb and uncaring . After all exploitation will keep driving the killing and the risk taking in  Northern africa and themiddle east
The problem we have in undersatnding why we are, as Australains  in 2013, so ineffective in supporting rural communities runs very deep . Deeper than any edition of Landline ever goes and deeper in our thinking than most want to go - the complexity and delicacy of nature's gifts and the simplicity of our own simple economic imperatives.

There was a time,  not so long ago, when there were lots of moral ( or value )  incentives for landowners to feed our own people  -eg in nearly all the centuries before this one. Most of the new disincentives to feed the people are not obvious because they are not talked about ; criticisms  of producers is "not nice" in any circle  - its not politically correct to say up front what is thought deep down .Yes they are rich ( capital wise - they have to have high equiy to survive )
The Greens aren't right of course,  but they dig in a important and sensitive area - a sore that must be exposed before it can heal . The silence on this subject doesn't stop people thinking bad inadeqaute and misplaced thoughts and those thoughts finally finding a place in policy - because the discussion is not a open one. Policy by default (HIFFEA)- "its de other blokes fault " (HIFFEA)- can really become the standoff position for many? People at parties quietly talk about a better way,  but they haven't found one (Everyone becoming vegans isn't really ' an answer -- is it ? You tell me below  Ruminants for example are necessary to maintain  grassland and tundra ecosystems . The simple fixation of many Greens with trees is simply wrong being both simple and wrong , A simple view of nature means a highly constrained view of life and thats what many are stuck with.   Limbo land is not motivating - its depressing and we are living in it   Copyright EA Feb 8th  2013.
Farmers were once valued as' the salt of the earth"; Now, in this century  there is some doubt they do anything right (which is in itself not right ,but its real - how about in your neck of the woods?)  . "Put it all back to trees" many say , from the comfort of their chairs infront of the TV.

I , just like those who cleared the land and still feed you, don't want any quick patronising responses to this rant . There is at least an element of quick fix in most responses  I see in over 3 decades of work in this area; Whose on to talk about it thoroughly?   Who reading this will seek to hear a local farmers hurts ?
We,  like many of you,  though, think our past Governments , Agriculture Departments and accountants have not really helped us live sustainably-  all the same.The problem of poor perception of what is needed still dogs the left and right in politics . This shaky ground on either side means we are lonelier than we thought when both parties at least placed people in our communities. .
Our only safety as eco communities here is in the truth and there is far too much shallow talk and implied criticism in the media- and fewer and fewer production ecologists to help us establish the truth. There is hardly a forum , with all the noise about this , for the truth .
Did this land go salty for example or did the soils deteriorate ? Under what circumstances will the damage be restored ? Confusion and unanswered criticism remain like salt on our wounds - no truth -just questioning and implied judgement
While it is not often said is that today in 2013 some new things are implied - a new political correctness ;new fears and new realities: a new religious and politically correct vocab. "Humans are a scourge and farmers the instrument of that scourge "
Because we don't talk about it we, as asociety  don't really know and live  the truth . Farmers have become the focus in what is now seen to be man's role as a pest -Man has become "the scourge of the earth" and men who work the earth just dumb defendants .
The subtle shift of blame from the greed of people to greed pressure on the ground is almost impossible to make a talking point - does  the city want to bury its guilt somewhere and on some one?  ; we like to shift blame onto someone other than ourselves and the process works most reliably when the people are far away and not like us? ; When we don't have to understand them and clearly don't .

Farmers too are used to low returns - they can cope with that and always have . What they can't hack is the careless criticism by the Greens in particular . Care has to deal with the truth if it is to be truly respected as care
Am I saying all agriculture should be accepted ? No, clearly not .Infact marginal land s use must be targeted for change but in a careful way . Finding the balance between pushing the boundaries ( the unwise attitude of early agriculture)and accepting new and reasonable  boundaries ) is  a reasonable way  forward ; for eg " wilderness is not diversity if fire is the main driver : and some agriculture and some agriculture  next to native ecosystems is quite sustainable.
Common enemies
The really  big threat to our sensitive environment and ecosensitive  farmers  is the insensitive nature of modern economics. Farmers were once were screwed by this on one old side only  - now they are screwed from both sides ( value and the values) .
The recent report into Tasmania's production dilemmas talks about "motivation" . If men who were once "the salt of the earth" have become to be seen as scourge agents there is now  no real deep motivation to work with nature . Whether we see it or not, there are lots of people who  project our/their careless treatment of the environment  onto people ; None of us are allowed to dare to touch the now sacred objects; farmers now being key offenders in that regard .  Motivation is a religious matter. The ongoing pressure on rural producers is to try and sit on the knife edge of 'screw you jack economics " .
What can we do?  Sorry about this lengthy rant . I do believe there  is lots consumers in particular can do here. Best not to add the detail  here - but summarize them later-- if you are interested

City people need to expand their minds to the possibility of more than one way to do " economics" .That way there is the possibility of hope and a way forward for both sides .
if our people chose to buy non caged eggs - how wonderful .
If they choose to buy local milk their few cents a week can give farmers a holiday
People who make these choices are doing what no government with all its power can do . Our people are chosing to a pay a little more for local produce and thats a great thing because its all about margins ( $0.10 extra for a litre for milk could give dairy farmers a holiday they have never had )
This issue is important because if Tasmania can have 2 heads about this (ie show some leadership and diverse tension thinking ), so perhaps can the poor people in the Middle east and Africa who face the same pressure and more - to push boundaries in search of a profit .To only just get their one year and go out backwards the next .